What Are Dew Claws?

Take a look at your hand and focus on your thumb, a dew claw can be considered a dog's thumb, it is higher up on the paw, has a toenail, and never reaches the ground like their other nails do.  Dew claws are located on the inside of the front paws and some extra special dogs even have them on their back paws but it is not very common.

When calling about a Cockapoo puppy people often ask me if I remove the dew claws and the answer is no, I do not remove them, and do not see a need to. Because dew claws do not touch the ground their nails do not get worn down like the other ones do, hence their need to be monitored and clipped more often than the other nails. Some people simply do not like to maintain or clip their dogs nails so they remove the dew claws, usually when the puppies are first born, or when their pet is getting spayed or neutered. Sometimes dew claws do not grow properly, they can dangle or grow inwards resulting in them getting caught on things or snagged, so it is important to monitor them and if you see an issue it would be a good idea to discuss it with your vet. If you are adamant about adopting a puppy that has their dew claws removed please check with the breeder before submitting a deposit. I have had customers reserve a puppy and then ask later if I would remove the dew claws and the answer is still 'no,' it's just not something that I do. If a puppy having their dew claws is a deal breaker for you than I am not the right breeder to get a puppy from.

The reason I do not remove dew claws is because my dogs have theirs and I have never had any problems with them, I view it as an unnecessary cosmetic surgery (just like tail docking.) I do monitor my dogs dew claws on a regular basis and clip them as needed.
Removing a dew claw is the equivalent of amputating your thumb, during the surgery the vet will remove the entire toe and claw and your dog must wear bandages during the healing process. Most people choose to have this procedure done while their dogs are getting spayed or neutered so that they don't have to go under anesthesia more than once and they also save on multiple trips to the vet.


When you first get a puppy that has their dew claws I suggest keeping an eye on their paws for the first few months, if you don't have any issues with their dew claws I do not see a reason to remove them. If you find that they are abnormal, floppy, or getting tangled on things then I suggest discussing it with your vet to see if they should be removed. If you do keep them make sure you clip them on a regular basis.

Spaying and Neutering your Dog~ When and Why?

There is a lot of preparation involved with getting a new puppy and talking to your vet about getting them spayed or neutered on time is very important. Spaying is the term used for Females and Neutering is the term used for Males and the general age to have this done is between 4 to 6 months old. With Males it is less invasive and cheaper, their testicles are removed and they go home and are told to limit their mobility for awhile. With Females it is a surgical procedure and more expensive than neutering a Male, Females may spend a night a the vets office and will go home with stitches and also have limited mobility for awhile. Some Females are bothered by their stitches and have to wear what is called an "E" collar to restrain them from licking and biting at their stitches. Depending on what type of stitches your vet uses your dog may have to come back to the clinic two weeks after being spayed to have them removed while other vets use internal stitching that dissolves over time and do not require them to be removed. 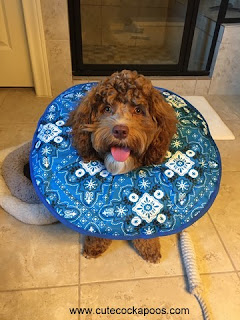 Benefits of Spaying a Female:
Unspayed females have a higher risk of developing uterine infections that can be fatal, called Pyometra.
Unspayed females have a higher risk of developing uterine and ovarian cancer, while a female spayed before her first heat cycle has almost zero chance of mammary cancer later on in life.
Unspayed females have 'heat cycles' every 6 to 8 months where they become moody, have bloody discharge, and can also develop an unfriendly odor that most people don't want throughout their house.
When an unspayed female is in 'heat' a male 'stud dog' can detect their smell from miles away and will do whatever he can to reach her which can then result in unwanted puppies, injury, and potential disease spread to your dog during breeding.
Spaying a female before she reaches her first heat cycle can also eliminate the risk of breast cancer.
Spaying a female prevents unwanted puppies and helps control the animal population, keeping them out of overcrowded shelters.
Pet license fees are generally higher for pets that are not fixed. 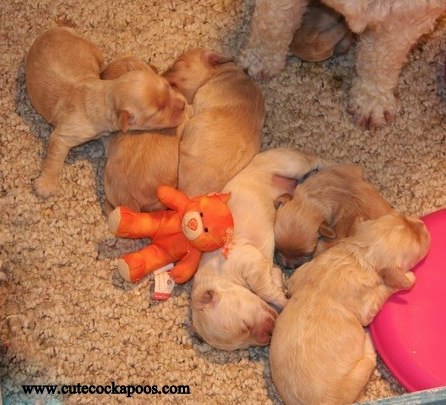 Benefits of Neutering a Male:
One of the biggest 'fears' people have about adopting a Male puppy is that they think he will spray urine and 'mark his territory' all over the place. This is true IF he is not neutered on time. I tell everyone that adopts a puppy that it is vital to get their animals fixed on time, especially with a male so that their hormones don't kick in and they don't pick up stud like behaviors. If you do wait too long to get your male fixed some of the stud like behaviors that they can develop may not go away if you do eventually get them neutered.
A male that is neutered on time does not develop behaviors that a stud will: they won't mark their territory, act aggressive, fight with other dogs, hump your leg, or run all over the countryside trying to find females that are in heat.
Neutering a male dog can help prevent enlargement of their prostate gland, testicular cancer, hernias, and tumors.
Neutering a male of course prevents unwanted litters of puppies and protects them from potential disease and injuries they can get during breeding.
Neutering a male prevents unwanted puppies, helps control the animal population, and keeps animals out of already crowded shelters.
Pet license fees are generally higher for unfixed pets.

In general spaying and neutering your pets can lead to a longer, healthier life with a milder and more predictable personality. The cost to have the procedure done may seem expensive at first (shop around and compare prices at various vet clinics,) but it's not nearly as expensive as treating Cancer or other issues that may arise in a pet that hasn't been fixed.
For anyone on a tight budget there are generally low cost spay and neuter clinics available in larger cities, please ask your vet or local shelter for more information.


For information on the Cockapoo Puppies we have for sale please visit our website: https://www.cutecockapoos.com/puppies-for-sale

Posted by Cute Cockapoos at 3:08 PM